Want to start a gaming channel on YouTube and end up as big as PrestonPlayz? Watch his creator journey for the story behind his phenomenal success. 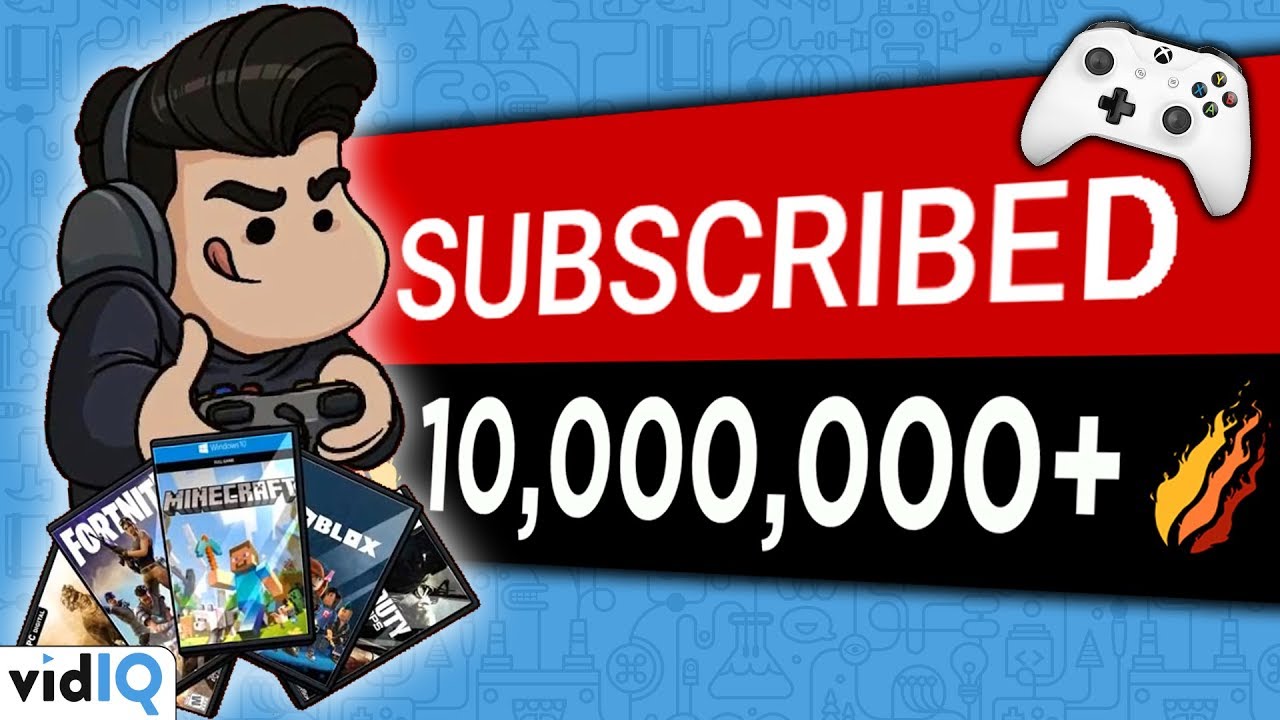 Welcome back to another episode in our exciting new series that champions some of the most inspiring YouTubers in the community. They walk you through there own personal journey to YouTube success, animation style.

Today we take a look at the brilliant PrestonPlayz who has built up a number of successful channels on YouTube including, of course, Prestonplayz, Preston, TBNRFrags, and PrestonMobile. Together, these channels have generated over 17 million subscribers and over 4.5 billion views. Let's watch the story of his YouTube creator journey from the man himself - full video transcript is below"

Hi, I'm Preston Arsement. Gamer, businessman and creator of PrestonPlayZ, TBNRfrags, PrestonRoblox and PrestonMinecraft. I know, so original. Honestly, I wish I knew exactly when I realized I was a successful creator. But YouTube just moves so fast. Because of all the hard work and the hundreds of all-nighters I've pulled everything is a blur. A happy, fun blur but I'll do my best to explain because this is my creator journey.

Long before I got into the YouTube business I was always an entrepreneur. I was a lifeguard, I worked for a painting company that my family knew and I would do any odd jobs to earn money. Even at 11 years old I was mowing lawns and knocking on our neighbors doors to drum up business.

My first channel TBNRFrags is focused mainly on first person shooters, and geared towards a slightly older audience. I started that channel simply because I saw one guy uploading Call of Duty videos and thought I could do the same thing. It might seem a little bit conceited but most 16 year olds are a little conceited right? I was a PC gamer and I saw a YouTube creator named xJaws who you might remember. He made Black Ops 1 content and I thought to myself heck, I can do this and I'm on PC so it's gonna be even better.

Of course in the beginning it wasn't as easy as I thought, I was scrutinized by a lot of Call of Duty community as every creator was especially because of my faith. The community was not the nicest so I had to build up some thick skin, had some motivational chats with my mom to keep me on track.

It's difficult to get berated by thousands of people daily. I remember wanting to quit at 30 000 subscribers but of course, my mom convinced me otherwise. She knew I really didn't wanna quit and I think deep down inside I knew I didn't wanna quit as well. But sometimes, it's just really hard to deal with the backlash that you get being on a platform with so many eyes always on you. If you wanna be a content creator this is definitely something you are going to have to be aware of, and you're gonna have to build up that thick skin.

It was hard to build an audience so I transitioned to doing more zombie game play. The audience was bigger and I love zombies. Plus, since I was killing zombies instead of other players I could engage with my viewers a whole lot more while I was playing.

If you guys didn't know, I really got my start on Twitch TV rather than YouTube. And I used Twitch TV to grow my YouTube audience. I had a really big breakthrough whenever I signed with Machinima in November of 2011. They made me a Machinima Respawn Director on their YouTube channel allowing me to post a video a week on the channel and then I started a series on my channel called Moab with every gun in Modern warfare 3 and that's a really helped accelerate the growth of my YouTube channel. As well as the bags under my eyes, 'cause it take me about 12 hours to get each gameplay video.

However my real breakthrough on YouTube came when I moved to Minecraft. I'm not even kidding. When I created my second channel PrestonPlayz my new found success wasn't necessarily from the change in video game, but the way I changed my approach to making videos. My TBNRFrags videos were more focused on being good at the game. Like I said, sometimes videos would take me up to 12 hours sometimes even longer. At other times I could get it done within 30 minutes to an hour due to the nature of Call of Duty and trying to get 24 kills in a row with a weapon that was not necessarily made for getting 24 kills at a row.

For example a silenced pistol, it's very difficult to do and sometimes it would take multiple days just to get one of these game play videos. It was mind numbing. Don't get me wrong, it was really cool to have people watched me for my game play and my skill, and they still liked my channel, but they weren't really watching for me. When I made that transition to become PrestonPlayz I focused on what I was saying as a commentator and how entertaining and engaging I was at least trying to be. It wasn't about who was the best at Minecraft, it was way more fun trying to be an entertainer.

In 2016, one of the hardest times that I'd overcome was when my dedicated recording group of friends, but you all know as The Pack stopped recording Minecraft content. Felt like I had lost my place in YouTube. But I continued recording videos by myself and eventually found new people in the community. Smaller YouTubers that were funny, wholesome and had a whole lot of good stow and just wanted to pursue this full-time. By giving these smaller YouTubers a chance I was able to connect with new viewers and continue to move forward.

We as humans want to progress in life. Correct me if I'm wrong. Creating content is like playing a game with YouTube's platform. What are the secrets? What's the next big trend? How can you make your own trend? How can we combine element X with element Z and element Q, to create this awesome new type of content? Moving forward is always important but having a balance in your life is also extremely important.

I would say the big struggle throughout YouTube would definitely be not taking enough creative time for myself, I tend to like to stay inside and record videos for about a 100 hours a week I'm not kidding. But at a certain point I realized that if I don't go outside, go to the gym, get some fresh air or even read my bible, my commentary will start to drop off and I'll start to lose my edge. Hard work is what helped my channels takeoff and grow and of course I credit a lot of that to my faith and all the family and friends I have around me, but there still has to be a balance even if it's not always 50-50 or even 90-10.

I've now learned that the more I've intertwined my family into business the more fun I've honestly had. My siblings and my amazing wife we're always having a blast filming content with me. I think that family has really made me successful because I want to work hard for them. I came from a humble beginning, we all lived a in motor home together for many many years and had just each other and that's all we needed. My parents had a traveling music ministry and so we got very close in that tiny motor home together. So the fact now that I have a nice car, and a nice house it really doesn't mean much to me, at least not as much as getting to hang out with my family. And of course the amount of sweet messages I've received from my audience has just been so overwhelming. I have a fan art wall at the office and I don't even like to call my viewers fans I feel bad but this viewer wall of mail and art in the office if I ever need inspiration or I need to remember why I'm doing what I'm doing because maybe I've had a hard week or something has happened, I just go to that and I just look at it. I mean it's just, it's overwhelming to see the support and to see that somehow I've changed peoples lives for the better by just playing video games and uploading it to YouTube.

We've recently started a fourth channel for the newer version of Minecraft. It's called Bed Rock Edition Windows 10 edition, Pocket Edition whatever you guys wanna call it, but do a lot of cool branding content on PrestonPlayz now, it's fun to kind of expand, play new video games but eventually I think I'd be more fun if it was mainly real life content. Vlogs, videos of my siblings, challenge videos with my wife, just having fun with my family and friends, and trying to entertain viewers. In fact, we've already started doing that in 2019.

The audience that we have is the coolest audience ever. And making videos for them is literally just pleasure at this point. You ever go to Chick-fil-A and they're like, "My pleasure." That's how I feel when I finish a video. My pleasure. Whenever we put out a brand new video people are like this is awesome, Preston is making money and working with the cool brand and we like it. I feel like nowhere else on YouTube can you find that kinda support from an audience. It's so easy to keep coming back and filming videos and stay motivated when you have the most amazing audience in the world. If you wanna be a creator follow your dreams. I don't think it gets any more simple than that.

A lot of us see things through a specific lens that we were forced to see things through, something that tells us our dreams don't matter. Or that they're too far fetched. But you have to find your own lens to look at the world. Find the way to believe in your dreams and pursue your passions.